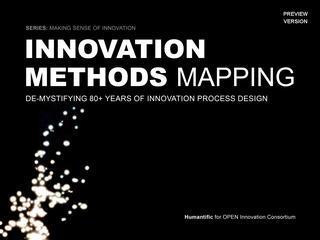 This is a preview version of the Innovation Methods Mapping Book. Copyright OPEN Innovation Consortium & Humantific. This book will soon be published.

I have been a fan of triz for many years, so I’m excited to find an overview and analysis of multiple innovation techniques under a single umbrella.  Definitely worth the time.

And – I gotta say – I LOVE the facility of this e-book.  From a market-eer perspective, it has a coolness factor that is worthy of mention.

Last week, I was sitting in my chair watching Season 1 of “The Killing” on my iPad.

My husband asked  “what ya doin’?” as he walked past

me.  When I responded “watching TV”, it dawned on me how ludicrous the response was – but how typical.  Most people (myself included) when asked “what ya doin” respond with “going to a movie, watching TV, reading a book, surfing YouTube”.  We use the technology or platform to describe the content we are consuming.

Similar to the days when we stopped calling automobiles “horse drawn carriages”, we are in the process of transcribing new ways of defining content without our historic, platform based context.  Which leads to the question – how will we describe content consumption when screens are ubiquitous?  Two ways I currently see this evolving are:

1) Branded content. Instead of naming the platform we name the content, as in “I’m watching The Killing” or “I’m reading The Help”

2) Re-purposing existing platform terms.  I already see this on Amazon: new movies available for purchase or rent are called “movies”, while movies that have devolved into the “Prime” membership are called “videos”.

3) New terms.  I know they are out there, but I haven’t seen them all: webisodes, v-blogs, web tv…

Personally – I hope we go to branded content, since this sparks lots of conversation and promotes the story, not the platform.

What do you think?

One of the core tenants of Transmedia Marketing is the development of a concept/story that is designed to be consumed across multiple media.  What I’ve come to realize is that there still seems to be some confusion between “media” and “platforms”.

> Some of this confusion is a result of industry evolution:  traditional media companies were often defined by the platform they used (newspapers delivered news via paper, television companies delivered entertainment via television, etc…) while newer media companies are an amalgamation of multiple platforms and/or media i.e., Google with YouTube

1) “Media” refers to the consumer intent: watch a movie, read a story, play a game, share/contribute, learn the news, etc…

2) “Platform” refers to the manner in which the media is consumed: consumers can watch movies on their television, iphone or in a movie theater.

If we design a story for PLATFORMS, then we run the risk of creating a very mono-dimensional story, and getting lost in technical fads and operational processes.

>  YES, telling a story in a movie theater requires very different specs and technical considerations than the same story told via hulu, but in both instances, the consumer intent is to watch a movie.

If we design a story FIRST for different media THEN for different platforms we have the opportunity to create truly engaging, interactive and viral stories. 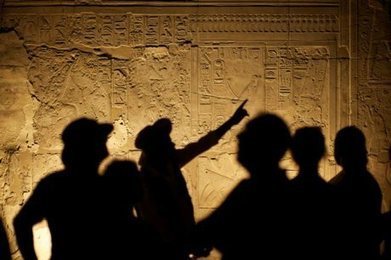 I love it when someone questions the quo!

tweets from my twig